Examples from the focus groups during the Multiplier Event

Expert report - relates to image below

“Francesca wanted to insert in the text a drawing in which she effectively represents herself while trying to demolish the wall she feels has risen between her and history, the discipline with which she has more problems, since her debut in course of the first cycle. The material appears to her as a sequence of interesting and dynamic res gestae, which however fails to memorize as she would like”. 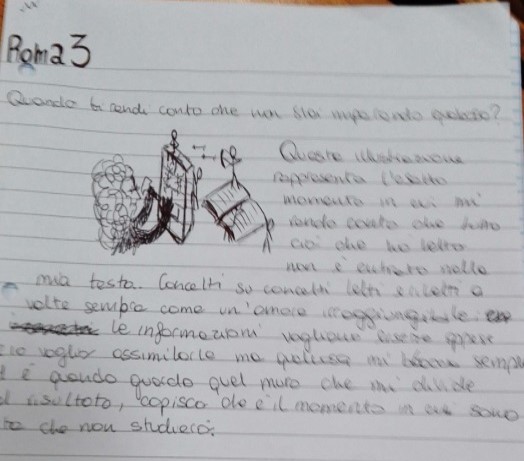 “This illustration represents the exact moment when I realize that everything I have read has not entered my head. Concepts on concepts read and re-read sometimes seem like an unattainable love; the information wants to be learned and I want to assimilate it but something always blocks me and it is when I look at that wall that divides me from the result, I understand that is the moment when I'm sure I will not study” A. F, Istituto Confalonieri

Expert report of the day

“My idea from what emerges is that surely the analysis of the disciplinary bottlenecks is an important informative element to try to improve the quality of disciplinary teaching through the implementation of targeted strategies, but it subsists what I can define a sort of ‘bottleneck of bottlenecks’ concerning a problem large-scale time-related training of the teacher and the student. In the specific case of Physics, even before concentrating on the resolution of a specific local problem, one must think of solving the general bottleneck related to education in scientific thought, which must necessarily start from the kindergarten with adequate teacher training. Dissolving this knot inevitably facilitates the location of path bottlenecks and their resolution.

This attempt to identify a protocol for the resolution of bottlenecks must however always deal with a randomness of educational processes whose roots sink in more areas, not least the psychological one”.

Lisa has a very good academic performance, but she complains about the difficulties in the fields of logic, mainly mathematics. After a succession of various teachers, in this school year, Lisa has noticed so much difficulty in the study of the subject at the time attributable to the teacher who, driven by the need to complete the program, does not dwell on students who have difficulties in following her. Lisa to overcome her difficulties, it is necessary to memorize the formulas and apply them when necessary. With the class they talked with the teacher, getting only a minimum recovery during the lesson hours, which at the moment still cannot relieve their gaps. Lacuna that for Lisa go back even to primary school, where mathematics was not presented as a game. The teacher imposes her method that must be accepted by everyone, just as she says. Unfortunately, working schematically, needing a certain order, has no choice but to memorize. If you organize the courses of recovery would be great, but even better if they were taking teachers other than those in the classroom, but this does not happen in your school.

Mohamed has also problems with mathematics, but he is working hard at home online, where he tries to find the solution to his problems by doing exercises and finding solutions. Only if he manages to intervene during the lesson interactively, feeling "inside" the matter, could obtain results, but when he does not feel involved in the topic, he resorts to other sources, just like internet.

- school time is discontinuous due to repeated interruptions of various nature (absence of professors and students, extracurricular school activities that overlap with the lessons ..) and content objectives often oversized compared to the time actually available: in the classroom you cannot stop enough on the individual contents, a lot is delegated to work at home;

- the attention spans of the boys become shorter and shorter, compared to the past generations.

Comparison between sport training and study training and lasting concentration over time. It is noted that practicing physical activity regularly also leads to the improvement of the management of one's own time and the maintenance of the commitments made.

The discussion is interesting, but I predict that it will be difficult to finalize on a specific bottleneck, which is that it can be used by a hypothetical teacher of the class of two girls present, who wants to practice DD.

It is evident the desire of these girls to find listening from someone who is in charge of their education.

German emerges as a difficult subject (a fundamental subject for their studies). The girls still report problems of the "structural" type:

- change of several teachers over the years;

- dispersion of time during lessons, which, prolonged in the years of high school, has led to an effective loss of learning opportunities.

Girls find it hard to find an epistemological bottleneck, the main concern seems to be the human relationship with the teacher and with the rest of the class group; in this regard it should be kept in mind the age of the girls, just over 18, and therefore in a phase of life in which the emotional and social aspects, the search for their identity within the company are the focus of interest.

- difficulty in intervening in a discussion within the lesson, even in the presence of a good theoretical preparation in the subject "German language";

- perception of lack of listening and empathy of the teacher towards some students, in favor of others, inequalities of treatment, lack of attention of the teacher;

- failure to communicate with the teacher.

The teacher, after listening carefully to the girls, and encouraging them (responding to their request for empathy from an adult who they did not know, but who now appears to them in an institutional role) tries to shift the attention from the emotional aspects to the disciplinary aspects. The girls do not feel sufficiently prepared in German, the subject of the upcoming exam, even if they observe that the conversational work they are doing in class with a mother-tongue reader is giving satisfaction and signs of improvement, forcing them to use German as a language, as such, a vehicle for ideas”.

Expert report of the day

“The boys ask for more listening about their educational needs. The text books used do not follow the lessons and there are very dispersive aspects compared to what it is required in practice. Teachers often refer to lessons to try on the web each as on ‘You tube’, often produced by teachers from other schools. Often the topics not included are asked to classmates who have received explanations outside the school but are not asked to teachers thinking they cannot receive an answer. In the classes there is a small group of students who always study and who communicate with each other throughout the school year unlike most who are not interested in general if not for the minimum return. The hopes of using the concepts learned in the world of work are very limited and even on the part of the teachers there is not much reassurance about it. The need for greater passion is expressed in observing, analyzing, understanding and reproducing the notions shared by the class as assigned tasks. The bottleneck consists in the difficulties of emotional relationship and teaching effectiveness, in difficulty in sharing the general planning and the pleasure of knowledge.

Often the training path is experienced only as a moment of acquiring nationality and not of maturation in the group and in the social relationship. In this the teachers appear distant and not present in the need to listen to the students, in relation to the need for a gradual understanding of the contents and the need to create a welcoming emotional environment based on expectations of enthusiasm and hope for positive investment in the future of young people”.

Teacher report of the day

“When asked ‘When you realize you are not learning, bottleneck has been identified as a loss of concentration.

The two students of our group, belonging to different addresses and schools, said that even if they start to follow the lesson with interest and motivation, after about half an hour they start to get distracted.

Both boys have also identified the cause. According to them the teachers present the topics with little synthesis, often wandering. In this way the boys feel they do not learn, they do not understand what the central topic of the lesson is. All this often leads them to feel in a "passive" learning condition, they feel like containers to be filled with information, without having the possibility to intervene in a critical and autonomous way.

Their proposal would be that of a frontal lesson, which they consider necessary, integrated with group discussions, within the lesson itself, where students can feel active participants.

Arrived to the teacher's question ‘How can you help students to define obstacles’ my answer was simply that of direct confrontation with the student. I realized that the student in difficulty, and the two boys have confirmed it to me, hardly asks for direct confrontation with the teacher to identify the causes of failure. To prevent this comparison may be modesty, shame, disinterest or low self-esteem.

However, this can generate a vicious circle that inevitably leads to failure of the student. For this reason, I believe that the teacher's first move, after a period of observation, is to talk directly with the student, ask what is blocking him, identify the weak points. The boys have confirmed to me that every time they feel interest from the teacher, they feel motivated, stimulated, understood. The negative vote of a verification, if appropriate explained and motivated, it can become a starting point to try to do better.

To the final question on the usefulness of the Methodology Decoding the Disciplines, all the members of the group gave an affirmative answer. All of us at the end of the discussion, we reflected on the importance of the comparison that this meeting offered us.

The students were very happy to have been able to speak freely and critically with the teachers in relation to their difficulties; the teachers have had the opportunity to confront each other in an equal way, not ex cathedra, with the recipients of their work, in an exchange not virtual but real and true. 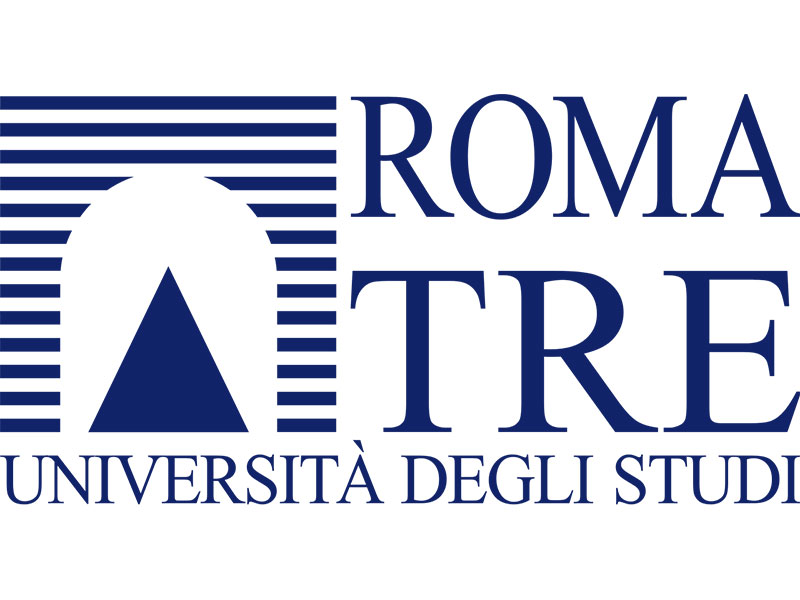 A description of the Multiplier Event and Decoding the Disciplines Workshop held within the Laboratory of General Pedagogy.

View resource
This block is broken or missing. You may be missing content or you might need to enable the original module.